Lee Sedol, 9-Dan and 18-time world champion, plays his 18th stone in the second game against Google’s AlphaGo AI. AlphaGo quickly places its 19th, move 37 overall, and commentators around the world deem it as a mistake by the infallible AI. Sedol leaves the board and walks out of the room.

The game of go has recently gained public eye due to advances in AI from companies like Google. Due to the game’s seemingly infinite move choices (over 300 possible moves each turn and around 10^(10^48) possible games) and inherent pattern-recognizing gameplay, it serves to test an AI’s learning better than the classic chess-test could ever do.

Another main benefit for using Go as a benchmark for artificial intelligence technology is due to its simple rules. The goal is simple: Whichever of two player’s stones completely encapsulate the largest area wins the game. 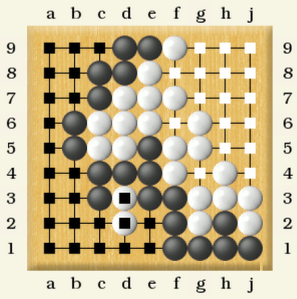 In small games, both player’s moves form a natural divide on the board with easily defined areas, but as the board gets bigger, areas of both players create a vast and whirling shapes with their respective stones. The strategy of the game revolves around a player’s offensive maneuvers towards the other’s area, and the defense of their own.

This has been in my drafts for a long time. I will put another part to this soon, but I want to get more current stories out there so this will be it for now!